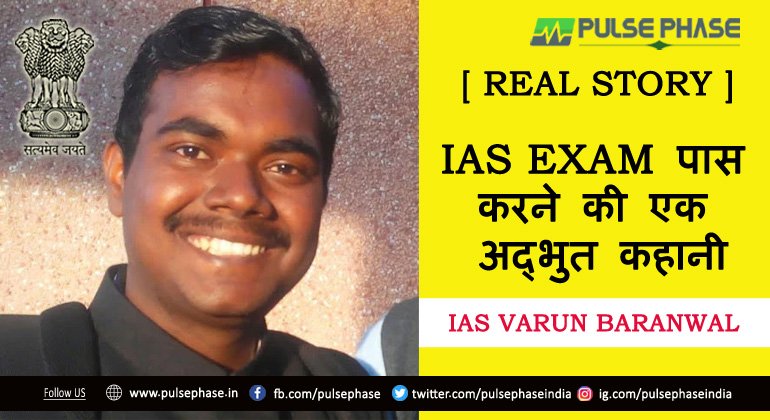 IAS Varun Kumar Baranwal, A Name in the history of UPSC worth remembering. A boy who lost his father at an early stage of life. His mom used to work in her own cycle repairing shop. A sister who helped her mom with all the work and even took tuition to help his brother in studies.

Additionally, He had no money to pay his college fee. Yet, this man cleared the UPSC exam and today’s story is all about him. We can learn many things from this person. Any other person would have given up easily but this man has to become a perfect example of life.

The most important thing which we learn from this hero is that no matter what life throws at you, losing is always your selection. This man really made “Lemonade” from “Lemons” life threw at him.

I feel very inspired by reading his life-story and I wish to meet this person in real life. He truly stands as a HERO in our society.

Let’s start his story. IAS Varun Baranwal is from Boisar ( A small town) in Maharashtra. He was waiting for his 10th result to come but life wanted to test him since the early stage of life.

He lost his father who was suffering from a long disease. His father’s health has already put his family on the back foot financially.

Meanwhile, Varun Baranwal has topped the exam with flying colors and has got second rank in his town. It was a great boost for his confidence and he started getting recognition in his town for being the best students.

He was brilliant since his school days and everyone knew that this boy is very special.

Life is always not frustrating as it seems to us and it opens so many other doors if it closes one.

Somehow, Varun’s life has also been like this. The doctor, who treated his father one day, came to his cycle repairing shop.

Till then Varun Baranwal had left his studies and had planned to take his father’s business to a new strength. The doctor asked why are you not in school. Then, Varun told his story that he has no money to continue his studies but the Doctor was not happy.

After getting the admission, he got involved in the studies but never sidelined his family priority. He used to go to school in the day time and manage his cycle repair shop in the evening. And at night, he used to fall asleep with books open.

Interestingly, he was not able to pay his further fee but due to his brilliance and humble nature, his teachers made monthly contributions and paid his fee every month.

He even took tuitions and earned some money to help him with his studies. Somehow, he passed the exam and he wanted to become a Doctor. But he knew that he is not capable of becoming a doctor due to high expenses.

Further, he decided to become an engineer and got admission in MIT college, Pune. He studied his graduation and topped the very first semester of the exam.

He got 86% marks and  He jokingly said in an interview that it was very tough to get such a score in his time but now it has become easy.

Notably, his family had to sell his ancestral land for the college admission. He then further taught his classmates to earn some money and completed his graduation.

He recalled incidents and nostalgic memories form his college days. How he used to teach his Afghan friends who were not able to attend the college due to some reasons.

IAS Varun Baranwal was not interested in UPSC and how he got into it is also an interesting chapter of his life.

After passing the graduation from MIT, he was all set to Join a Multinational company Deloitte. Everyone was happy at his family and he was due to join this company in the next 6 months.

But, there are bigger plans which life had thought for him. Do you remember the Anna Hazare movement which took place in 2011. Anti-corruption dialogue was always high in our country.

Anna Hazare is also from Maharashtra and attracted this young man and he finally decided to meet this legend in person.

He met Anna Hazare during the Anti-Corruption movement and after meeting him, he decided to prepare for Civil Services. This was the first time in his life, he thought of becoming a Civil Servant.

He first time realised that there are many people like him in this country and to help them in a better way, he needs to be at some position. What better than a civil servant if you really wish to help the country.

His Mom Was Not Happy

Yes, you got it right. His mom was against this decision of his and he never wanted him to study further. After all, she has taken a lot. Thus, she wanted to lead a normal life after Varun’s Job.

But this time again, Varun Baranwal listens to his heart. He started for Indian Engineering Services first, but then some friends of his suggested him to go for UPSC Civil Services because he was sharp and brilliant.

But he knew that he had no money and he also refused to take the placement for the company. He again had no clue where to start.

Then his room-mate introduced him to Chanakya Mandal, where he taught and studied at the time. He studied there but there was no money to buy books.

Luckily, he knew someone from an NGO called HOPE, who arranged books for his UPSC exam.

Currently, he is working as an assistant collector in Gujarat and helping the society. He never feels shy in helping others and he never thanks his people. Varun thinks saying thank you will be an insult to what people have done in his life. He is always indebted and he wants to be like this only.

He is truly a legend in today’s world. Varun may not get a recognition like any Movie Stars but he is a hero for me. I will always look up to him in life as my inspiration. You are great sir.

In my blogging career, I meet with many people and take a lot of questions from students where they complain about being poor, non availability of resources and what not.

I always tell them this story not because I like it but because we take all things guaranteed in life and on the other hand there is this person who had all the possible obstacles to stop him yet he didn’t. A grand Salute to IAS Varun Baranwal

Answer – He prepared for UPSC in Chanakya Mandal ( A Non Profit Organisation). He taught and studied both in this coaching.

Question 2 –  What was IAS Varun Baranwal Rank in UPSC.

Answer – Varun Baranwal passed the UPSC exam in 2016 with All India 32nd Rank.

Question 3 – What was the age of Varun Baranwal when he cleared the UPSC?