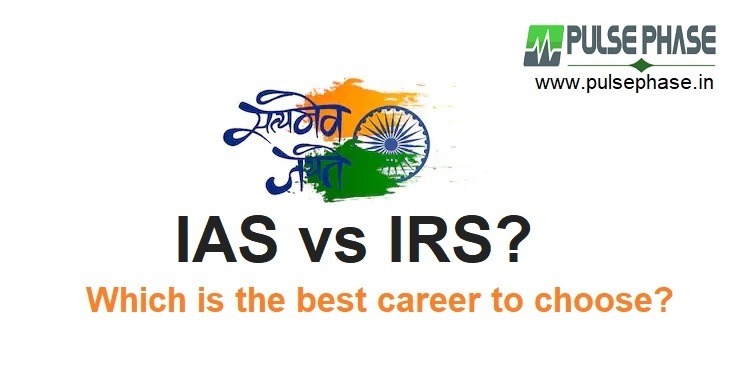 In the first place, let me expand the abbreviation for you. IAS stands for Indian Administrative Service. IRS stands for the Indian Revenue Service.

The Majority of the candidates aim to be IAS officers. It is the most popular job position among the aspirants. In other words, the UPSC civil services exam is the synonym for the IAS post.

However, even the other posts like IFS and IPS comes next immediately after IAS. Few candidates also aim for joining the IRS posting too. In fact, they will not have any kind of hesitation.

In this blog article, I would mainly like to bring out the difference between IAS and IRS. Get ready to explore the pros and cons of both services.

All of us already know about the power and position that comes along with the civil servant postings. The profession itself is magnificent in nature.

Of course, IAS is the one post that grabs maximum attention from aspiring candidates. At the same time, you should be ready to face the pit falls along the journey as an IAS officer.

An honest person will not be allowed to remain the same after starting the service. There is such a high level of political pressure and interference.

I am not saying it is impossible to handle the profession. In turn, you have to be well prepared in terms of mindset and behavioral attitude.

You must have heard about the famous IAS officer U Sagayam. He was transferred 20 times in 20 different years. So, compared to this struggle, an IRS officer can have a smooth profession.

Want to know a still number of differences between IAS and IRS. Each service post has a unique set of responsibilities.

Why do candidates want to choose IAS post? There is quite a good range of benefits and professional satisfaction. As a serious aspirant, you must definitely know about it.

Above all, you will get a chance to be in the prestigious social position. Of course, an IAS officer stands few levels higher than an IRS officer. If you aim at designation level IAS should be your choice.

IAS is said to be the administrative head for all the central government and state government departments. So, you will be the prominent decision maker for most of the issues.

As an IAS officer, you will get excellent facilities and perks from the government. When compared to that of IRS officers, here you will have an upper hand in terms of facilities.

IAS officer experiences the promotions at a faster rate. Let me give you an example. IAS officer can get promoted as commissioner in 16 years.

On the other hand, IRS officer needs around 20 to 22 years. So, there would be a delay in reaching the top designation.

If you want to help the people directly, it is better to be an IAS officer. IRS officer gets a minimal chance to interact directly with the society.

During the policy formation, the opinion of an IAS officer is very important in both central and state government.

Candidates who are interested in taxation generally go with this post. They find it passionate and easy to handle. Moreover, their particular choice of interest lies in the IRS.

If you are passionate and bold enough to go against the common opinion, go with your choice. Expect the better work-life balance in IRS when compared to IAS.

To be frank, there is almost zero political interference in case of IRS. Do you prefer to stay always in metro cities? Then, the IRS should be your option.

Yes! Absolutely true. Almost 90% of the IRS postings happen to be in metro cities or big cities itself. Let’s assume, your spouse is also an IRS officer.

Unlike IAS posting, it is possible to get both the postings together. You can also expect higher stability of tenure here. Enjoy fixed and normal working hours.

Generally, IAS officers need not work in the odd timings. Experience the luxury you expect in IRS than in IAS. In terms of political pressure, it is not a major concern in IRS.

IRS officers need to take up different roles to serve the society. They generally look after the direct taxes, tax investigator, policy formulation, the prosecutor of international agreements. So, they deal with the reduction of black money usage in society.

Throughout the career of an IAS officer, he or she can get a promotion and salary hike. How does decision making happen? The dedicated team analyzes the performance appraisal reports.

They also look into the overall record and vigilance clearance. The scrutinizing team consists of senior civil servants. Also, the promotion is depended on the number of years spent at a particular grade.

You need to reach the certain number of years as specified by the committees. This is done to choose only the best personalities for the higher positions.

Can An IRS Officer Get Promoted To IAS Officer?

In short, the answer is NO. Both the designation rule a different set of services. In my opinion, if a young IRS officer takes up UPSC exam again, then it is possible to join IAS stream. Otherwise, it is not possible for an IRS officer to become an IAS officer.

In today’s scenario, IRS-IT is considered as the second most powerful post in central government after IAS. Recently, they stood opposite to the finance section in case of independence of operational matter.

So, you can easily expect a few other constitutional posts and quasi-judicial posts in the hands of IRS.

In other words, an individual with IRS post is eligible to get promotions in the same line of revenue services. However, if you earn more than 15 to 18 years of experience can gain other posts similar to that of IAS.

Which Post Between IAS and IRS is Better For Woman?

From the women point of view, she will need a more stable kind of profession. According to my opinion, the IRS should be the preferred choice.

However, women also aim for IAS post while filling the application forms. It is always their first choice. There is no generalization of the topic.

Every aspirant taking up the CSE will have a dedicated desire to become an IAS officer. Here are the few reasons why I would say IRS is a good choice for a woman.

Now, we can easily say IRS suits woman better. But, of course, it is just an opinion. There are many female role models who can do a better job equal to men.

We can see a good list of women IAS officers. They take care of society and solve issues sensibly. In fact, women seem to be extra passionate about helping people.