The Civil Services Examination (CSE), also known as UPSC exam, is an examination process in India that is supervised by the Union Public Service Commission to recruit Civil Services of the Government of India. Economics Optional Books For IAS This exam consists of three parts.

In the UPSC exam, economics can be considered as a popular optional subject. Aspirants with a good commerce and economics can face this exam easily to earn a good score.

There are certain books to refer for economics optional to get the desired result. Some of them are:

Under this part there are mainly two topics to consider . One is Demand for and Supply of Money and the other is Public Finance and its Role in Market Economy.

Under this part Land System and its changes, Commercialization of agriculture, Drain theory, Laissez faire theory and critique, Manufacture and Transport: Jute, Cotton, Railways, Money and Credit are discussed. 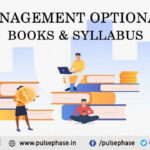