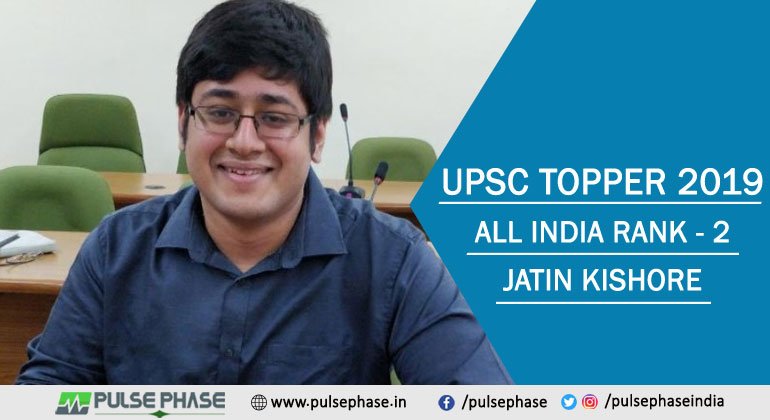 Every success counts, no achievement is ever big or small. In a heavily populated country like ours, we have millions of aspirants working hard to get in respectable positions. UPSC offers one of the most sought and respectable positions in India. Children have become so self-aware of who they want to be that they start preparing for the UPSC exam from an early stage.

Through the years we have heard amazing stories of students emerging from small towns and all sections of the society. All working towards the same goal of serving the nation and making it a better place. Every aspirant applies for the UPSC exam with a dream to do something big.

Today we are going to talk about the journey of a brilliant young UPSC topper, Jatin Kishore. Jatin Kishore at 26, topped the UPSC Civil Services exam in his second attempt, and got All India 2nd rank. He was not able to crack the exam in the first attempt, but that did not stop him.

We often find ourselves stuck in a difficult situation. We can either choose to give up or give it all we have to achieve our goal. Jatin didn’t make it through the prelims stage in the first attempt, but he chose not to give up. He decided to work hard with determination to make his dreams come true.

What kept him going was not losing hope. He kept faith in his goals and worked for them. Jatin did not just clear the exam in his second attempt but topped it. No one had a doubt, after all, he has been a merit student throughout his academic journey. It was his sincerity and hard work that made him successful.

Jatin Kishore, when you hear this name and read about his academic journey. You will start to remember him as the man who excelled at everything he did. He hails from Delhi and completed his entire education from the most prestigious institutions in the city. His inspiration comes from his wonderful parents.

Jatin’s father works with the revenue department while his mother is a teacher. Jatin shared that his parents have a big contribution to his success. They constantly supported him throughout his journey. This motivated Jatin to keep trying to reach his goal of becoming an IAS officer.

After completing his post-graduation, Jatin took a gap of one year. During this time he prepared for IES(Indian Economic Services). Jatin appeared for UPSC IES in 2018 and scored AIR 1 in the exam. This was his first step to an amazing journey ahead. His success had just started and it was all because of his hard work and dedication.

The dedication and hard work put towards one’s passion makes a champion different from the crowd.

After joining the IES, Jatin decided to give Civil Services exams one more try. He began to prepare for the UPSC exam while working as an IES officer. It was very difficult for him to manage his studies along with the job.

Jatin Kishore is currently posted as an Assistant Director with the Ministry of Rural Development. His UPSC success story is a motivation for a lot of young IAS aspirants. Aspirants often look for guidance and preparation strategies to help them crack the UPSC exam.

One of the major strategies that Jatin changed in his approach was to answer as many questions as possible. He shared that in his first attempt he could only answer 70 questions. Due to negative marking, he scored less than he had expected.

In his second attempt, Jatin answered 85-90 questions. He believes that this approach helped him score good marks in his preliminary exam.

In his second attempt, Jatin realized that making notes is necessary. He shared that it is important to revise your notes regularly. In his strategy, he also shared that it is better to revise one or two books, rather than reading several books at one time.

Current affairs are one of the most important parts of the UPSC exam. Jatin regularly watched the news, and read newspapers. He kept himself updated to the latest news and current affairs.

In one of his Interviews, he shared that almost all the books and best strategy is available online.  The candidates can do the IAS preparation at their own place rather than coming to stay in Delhi for IAS Coaching.

Jatin believes that IAS is a wonderful platform to serve, and contribute to improving society in general. His main aim is to work on environment-related issues. He also shared that he would like to focus on education, as it forms the base of life.

Question 1- What is Jatin Kishore’s strategy to become an IAS topper in the UPSC exam?

Answer –  Jatin Kishore worked on the below strategy to top the UPSC Exam.

Question 2 –  What is IAS Jatin Kishore’s Rank in the UPSC exam.

Question 3 – What is the age of Jatin Kishore IAS?