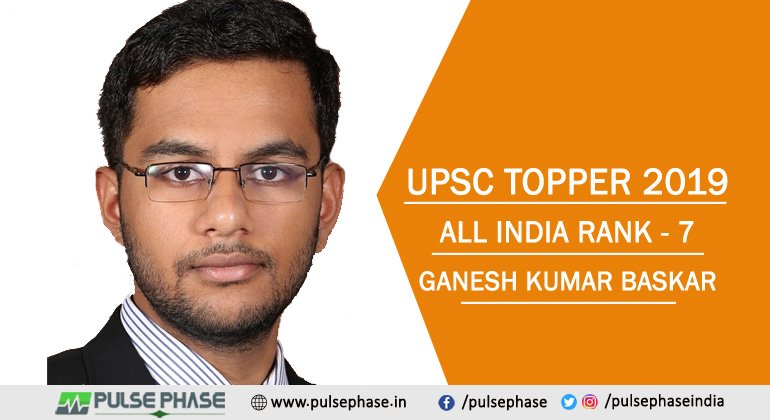 We can make our dreams come true if we dare to pursue them. If you want your dreams to come true you have to chase them and make them real. UPSC has been a dream of many and a million students apply every year all over India. The ones who are chosen are one in a million.

When you hear their success stories, they will tell you just one thing. Have faith even if you face failure. Try, and try until you reach where you want to be. Today we are going to talk about Ganesh Kumar who started his journey, with a dream of representing our country abroad as an Indian Foreign Service Officer (IFS).

When he appeared for the UPSC Civil Services 2019 exam, he expected to secure a rank in the top 100. Ganesh was shocked that he had not only just passed the exam, but had achieved an All India Rank 7. This was the biggest moment of Ganesh’s life.

Ganesh Kumar hails from Nagamalai Pudukottai. He completed his school education from Kendriya Vidyalaya Gurugram, and later from Madurai. Ganesh has always been a merit student. Scoring an All India Rank was not his first step towards success. He has been a class topper in class 10th and class 12th and scored  97.2% in class 12th.

Ganesh’s father, S P Baskar, served in the cabinet secretariat of the Central Government. Due to the position his father holds, Ganesh had to change schools each time his father was transferred.

Ganesh did his mechanical engineering from IIT-Kanpur in 2015, and did a branch change into computer science engineering. After completing his graduation, Ganesh wanted to pursue finance and appeared for CAT. He got into IIM-Ahmedabad in 2017 and completed his MBA degree.

The journey of Ganesh Kumar Bhaskar To Success

In our lives, there is always something that drives us to our dream. We all need that push towards our goal. Whether it is our parents or seniors who guide us to the ultimate destination. Ganesh got that push towards becoming an IFS officer when he was pursuing an MBA from one of the most prestigious colleges in the world.

Ganesh has always been good at maths and wanted to join the finance field. He talked to alumni at his university and realized financial consulting was not what he was looking for

While Ganesh was at IIM Ahmedabad towards the end of 2016. Mr. Kartikeya Mishra, who is an alumni, came to the institute as an IAS officer.

Mr Kartikeya’s story resonated with Ganesh as both of them have fathers working in the government sector. Mr. Kartikeya left a job in the private sector to be an IAS officer.  At that moment Ganesh thought of various career paths and decided that he wanted to appear for the UPSC exam. This was the starting of Ganesh’s journey to the UPSC exam 2019.

After completing MBA, Ganesh started working with a cloud data management company in Bengaluru as a product manager. After working for 2 years with the company he decided to resign. He felt that the job was not where he wanted to see himself in a couple of years. The dream of becoming an IAS officer ignited in his heart, and he started preparing for the UPSC Civil Services exam.

Parents always shape their children to be the best in all fields. They constantly motivate us and make us who we are today. With their help, we grow and build a whole new world. Ganesh got immense support from his father and mother. He quit his job in February 2019, three months before the preliminary exams.

Ganesh read a couple of books on civil servants and researched toppers and their strategy.  In September 2017, he started to prepare for civil services. Ganesh has been a top rank student throughout his academic years. Ganesh had been preparing for the exams at his house in Nagercoil for the past two years. He used to study 8 hours a day. A month before the exams, he prepared for 12 to 14 hours a day.

Ganesh Kumar appeared for the UPSC Civil Services Exam in 2018 but could not clear the Prelims stage. He started preparations based on the guidance of his seniors who are now serving as IAS Officers. He was able to clear the exam with the right strategy and hard work.

Ganesh did not give up on his dream even after his failure, and focused on his goal. He qualified the exam without any coachings. Through his experience, he believes that self-study is the main tool to get through the UPSC exam. He chose mathematics as his optional subject. Luckily he had many topics of maths as a compulsory subject in his undergraduate and only had to revise the topics.

According to Ganesh, a major part of the exam is figuring out the examination process and what the process demands, instead of just reading books and writing answers. He developed a habit of reading newspapers since undergraduate and that helped him a lot in his journey.

UPSC is considered to be the toughest exam and needs a rigorous preparation. Ganesh believes that first-time aspirants should look at the syllabus and question paper, and understand what the exam wants. They should also understand the scoring pattern, and then start preparing.

Although Ganesh prepared for UPSC at home, he believes that it is not for everyone. Every aspirant should prepare as per their requirement and strengths. The method of preparation varies from person to person.

He has an online subscription to The Hindu, and it played a crucial role in his success. The editorials and articles on domestic, and international issues. Also, the news and analysis on foreign and current affairs were immensely helpful for him in his preparations.

Ganesh also shared his IAS strategy for different stages of the exam. He shared that for prelims one has to have access to a lot of data. Ganesh used the underlining of the textbooks instead of making notes.

Ganesh shared that for mains you should have short and concise analytical answers ready that you can reproduce in the exam. He created online notes and used the same study material. He suggested that one must read pages relevant to the syllabus and make short notes.

Ganesh shared that it is more efficient to make online notes. An aspirant would want to add or undo notes, and digital notes help a lot in this case. After all, last time revision is what helps you score marks.

One of the major Strategies he shared is that figuring out the exam process is more important than just studying. Aspirants think that mains is the main exam, and often take prelims lightly. Preliminary exam is tough and many fail to pass it.

Check out: Best IAS Coaching in Delhi for UPSC Preparation

Question 1- What is Ganesh Bhaskar’s strategy to become an IAS topper in the UPSC exam?

Answer –  Ganesh Bhaskar worked on the below strategy to top the UPSC Exam.

Question 2 –  What is IAS Ganesh Bhaskar’s Rank in the UPSC exam.

Question 3 – What is the age of Ganesh Bhaskar IAS?

Question 4 – What was the optional subject of Ganesh Kumar Bhaskar.?

Question 5–  What Textbooks did Ganesh Kumar Bhaskar use for his preparation?