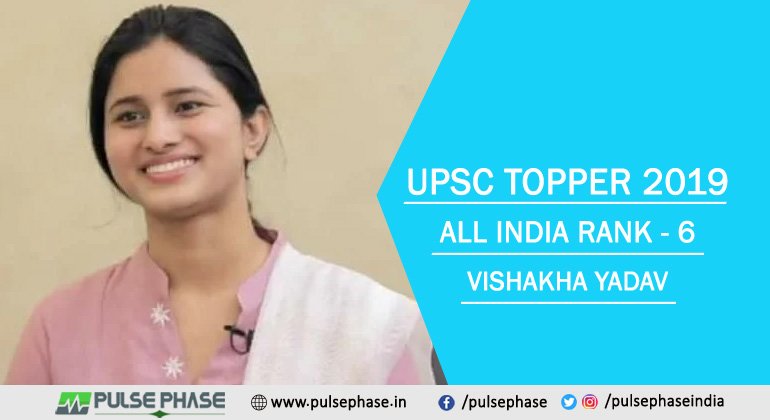 There are no limits to what you can do or what you can achieve. Only until you do not limit yourself. UPSC is all about achieving dreams and making dreams of other people come true. It holds one of the most respectable positions in India. No wonder aspirants from all over the world spend years preparing for the toughest UPSC CSE exam.

We get to hear stories of success, aspiration, and dedication. We are often known in society from the respect that our parents have earned over the years. UPSC gives Aspirants a chance of making a name for themselves. A chance to be known for what you have for the society and also make your parents proud.

Today we are going to talk about such an aspirant who secured All India Rank 6 in UPSC CSE exam 2019. A 26-year-old Vishakha Yadav made a name for herself when she scored AIR 6 in UPSC CSE 2019. She made her parents proud. The proudest moment was when, Dwarka district police, Anto Alphonse also met her and congratulated her for her achievement. Delhi Lieutenant Governor also praised Delhi officials daughter Vishakha on her achievement.

After completing her graduation, Vishakha was placed by the college in Cisco systems, Bangalore, Karnataka. Vishakha drew a lot of inspiration from her father. She wanted to gain financial independence, and started working in Bangalore. Her dream had always been to be a part of civil services and contribute to serving the nation.

Hard work and determination are the greatest strengths of a person. The key to success lies in not giving up, and keep trying until you achieve your goal. Vishakha emerged as a role model for women empowerment, through her dedication towards becoming an IAS officer.

Since childhood, Vishakha was passionate about UPSC examinations. She wanted to work towards serving the nation like her father. Vishakha was a meritorious student since her childhood. She scored distinction in both high school and intermediate exams. She completed her Bachelor of Computer Engineering (B.SE) from Delhi Technological University in 2014, and got placed by the college.

Vishakha had a well paid corporate job, but decided to pursue a career in UPSC Civil Services. After working for 2 years, Vishakha decided to quit the private job. She came back to her home in Delhi to prepare for the Civil Services Exam. She prepared for the exam for almost three years 2017 to 2019.

Initially, she took coaching from Vajiram Institute, Delhi. She needed guidance, and was not in touch with the humanities stream, since she was from a technical background.

She felt let down by her failure but her family constantly supported her and motivated her to achieve her dream. Vishakha did not give up, and continued to learn from her mistakes. She changed her strategy for her examination.

In 2019, Vishakha achieved the dream that she had been working on for three years. Her parents knew that she would get success in the UPSC exam, but she managed to surprise everyone by ranking among the toppers.

Vishakha shared that in the first attempt she appeared in the exam with not much preparation. She learned from her mistakes and gave a second attempt. Vishakha was prepared but not confident about her preparation to qualify. With a new set of confidence and determination, she changed her strategy.

Vishakha took the third attempt very seriously and prepared with extreme hard work, and an effective strategy. No wonder, her never give up attitude was the reason behind her mercurial performance. She used to go to the library every morning to study for the exam. This was one of the things that she followed throughout her preparation years.

Vishakha was so motivated in her preparation that she moved away from social media, and concentrated on her preparation. She used to spend an average time of 10 hours a day with her books. However, She believes spending more time is not all you need for UPSC preparation.

Vishakha ensured to set daily targets and revised them after completing them. She kept a constant track of her progress. She studied limited books and revised them over and over again. Covering up the whole syllabus is an essential part of UPSC exam preparation.

Even after successfully clearing all stages, Vishkaha started preparing for her fourth attempt. This shows the zeal with which she was dedicated to be an IAS officer. If you have a goal do not give up, give your all and you will achieve.

Question 1- What is Vishakha Yadav’s strategy to become a topper in the UPSC exam?

Answer –  Vishakha worked on the below strategy to top the UPSC Exam.

Question 2 –  What is IAS Vishakha Yadav’s C.S Rank in the UPSC exam.

Question 3 – What is the age of Vishakha Yadav IAS?

Answer – Vishakha is 25 years of age.

Question 4 – What was the optional subject of Vishakha Yadav?