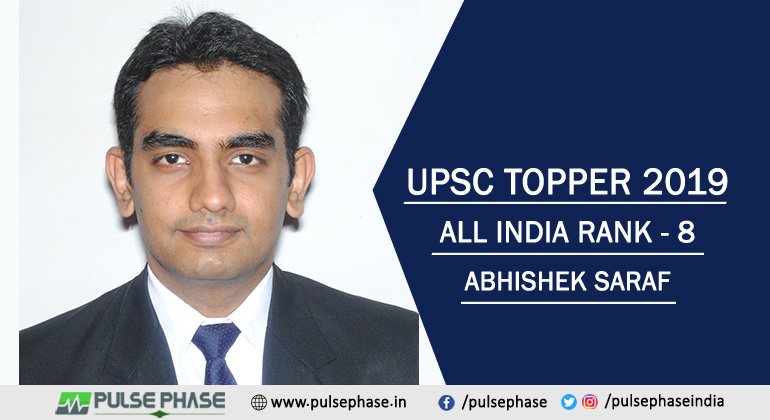 It is often said that there are no shortcuts to the path of success. One has to choose the hard path and overcome all the obstacles to get success. UPSC has been considered one of the toughest examinations in India. Every successful candidate that gets selected has paved their way to success through hard work, and dedication.

Today we are going to talk about Abhishek Saraf who scored All India Rank 8 in UPSC CSE 2019. He did not give up and stayed persistent in his preparation, appearing for the UPSC CSE 2019 exam in his fourth attempt. Aspirants all over India are inspired by his journey.

Abhishek Saraf is 28 years of age, and hails from Bhopal.  Although this was not the beginning of his success. Abhishek Sharaf had been selected in Indian revenue services in 2018. Even after getting this achievement, he dreamed of becoming an IAS officer. Abhishek believes that he would not have come this far if it wasn’t for his family.

Abhishek has been extremely talented from early childhood.  After completing his class 12th, he gave the exam for JEE and cracked the All India Rank 6. He completed his graduation from IIT Kanpur in 2013. Being a part of this prestigious University he emerged as a merit student. He got an opportunity to be involved in research projects in India as well as abroad.

Abhishek has overcome all obstacles in his life with the help of his mother, who stood by him through everything. Abhishek lost his father Arvind Saraf when he was 10-month-old. His mother Pratibha Saraf played the role of both a mother and father for him. She always encouraged him to be disciplined and hardworking. He made everyone proud by not giving up and getting success through his perseverance.

We all have dreams but it takes a lot of determination, dedication, and effort to make them come true. Abhishek did not waver from his path even after the challenges life threw his way.  He appeared for the UPSC exam 2015 but sadly could not clear the preliminary examination. Abhishek took a break until 2017, and gave his second attempt. This time he had more understanding of the pattern of the exam. This helped him crack the UPSC exam but he did not get a position of IAS or IRS due to a low rank.

Abhishek learned from his mistakes and prepared with a new zeal. He had a very good support system that kept motivating him to try again until he reached his goal. He also took coaching for UPSC CSE but it did not help him much. In his third attempt, he was aware of the areas that he needed to improve on to crack the examination and get a good rank. Abhishek got an All India Rank 248, and was selected in the customs department of the IRS.

Abhishek was still motivated to be an IAS officer and aimed to be in the Top 100 Rank. His dream kept him going, and he did not give up even after his success. He took civil engineering as his optional subject, since he has done B.Tech in civil engineering. His dream has been to be an IAS officer and work in the field of education and skill development.

Abhishek’s maternal uncle is an IAS Officer who motivated him a lot and was a great inspiration for him.  Abhishek is naturally inquisitive, and likes to learn new things from a wide variety of sources. The fact that IAS officers along with other civil servants contribute to the largest cross-section of society and in the most direct manner inspired me to become an IAS officer.

Aspirants always look up to successful candidates who were able to achieve their goals through their strategy and hard work. IAS officers guide young Aspirants, and carve their path to success. Abhishek Saraf shared tips and strategies that young aspirants should follow to get success in the examination.

Abhishek shared that there is nothing unique about the examination. Aspirants can follow the strategy of toppers but the key lies in consistently following that approach and preparing for the examination accordingly.

Abhishek also shared what he learned from his mistakes in the previous examination. In his first attempt, he only attempted 67 questions out of 100. If you want a decent chance to pass the preliminary stage, one should attempt 85 to 90 questions. In his second attempt, his interpretation of the essay paper was not right which led him to lose marks.

In the fourth attempt, Abhishek improved his style of writing in the examination. He wrote all answers in points. He used flow charts, diagrams, underlines to make his answers more presentable.

One of the major strategies he used was to do rigorous essay writing practice. He shared that an essay paper is not about the volume or the depth of content knowledge. It is more about diversity and the broadness of perspective on the topics. He focused more on essay writing and was able to present it effectively.

Question 1- What is Abhishek Saraf’s strategy to become an IAS topper in the UPSC exam?

Answer –  Abhishek Saraf worked on the below strategy to top the UPSC Exam.

Question 2 –  What is IAS Abhishek Saraf’s Rank in the UPSC exam.

Answer – Abhishek Saraf passed the UPSC exam 2019 with AIR 8 Rank in the exam out of the 829 IAS Candidates.

Question 3 – What is the age of Abhishek Saraf IAS?

Question 4 – What was the optional subject of Abhishek Saraf.?

Read More: Who Was the First IAS Officer of India? 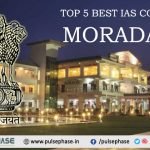