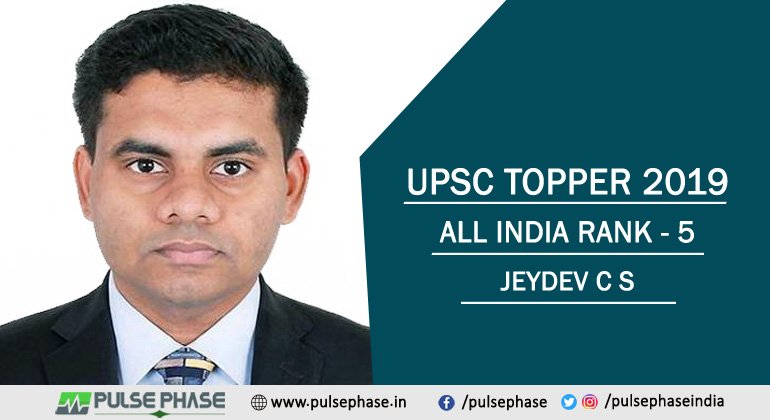 UPSC has maintained its reputation as the toughest exam in India. Still, millions of aspirants dream to be an IAS officer. Many aspirants apply for the exam each year, but only a few get to achieve their dream. The dreams that they have built and nourished for years.

We hear success stories of aspirants who have topped the exam with their hard work and dedication. Some of the aspirants join the civil services and serve the nation. Many fail and try again until they succeed. No matter the journey, their stories are worth sharing. Stories that will once again motivate aspirants to do their best and achieve their dream.

Today we will talk about Jeydev C.S., a 26-year-old aspirant who achieved All India rank 5 in UPSC CSE 2019. Jeydev C.S. hails from the beautiful city Bengaluru. He has achieved the highest rank in the state of Karnataka.  Through his achievement, he has made his family and state proud.

Jeydev studied at Frank Anthony Public School in Halasuru.  Jeydev graduated from the National Law School of India University (NLSIU), Bangalore in 2018. During his graduation Jeydev has been a successful quizzer, debater, and mooter. He was part of the team that won the international Henry Dunant moot in 2015.

Jeydev always wanted to be in the public sector and desired to serve in Karnataka. While he was studying at law school, he was exposed to how law and governance worked. He was inspired to see that many graduates at NLSIU  were entering government sectors. This inspired him to join civil services and serve his homeland Karnataka.

Jeydev C S- Journey to be an IAS Topper.

You must have heard people say this over and over “Try and Try until you succeed”. Aspirants over the years have proved how important it is to stay focused and keep trying if you want to be an IAS officer. Only the best are selected as IAS officers, and the work they do proves the reason why it is the most respectable post.

You would want to hear the story behind the man who achieved the highest rank in the state of Karnataka. Jeyev C.S. appeared for the UPSC exam in 2018 but could not clear the preliminary exam. He learned from his mistake and realized that in his first attempt he only had a vague idea about the format of the exam. He did not know what the demands of each stage were.

Jaedev realized that he needs to trust an institution and get guidance for the experience they have. He was a part of the Insights classroom OGP-2019  and Core Batch program (OGP to Core). Jeydev liked civics in school and that led him to join law school. While studying law he realized that there is an interrelation between law, and policies.

Since civil services in India has a central role in implementing policies, Jeydev was motivated to make it a career. After graduating from law school in 2018, Jeydev moved back to his house in Bengaluru to concentrate on the examination. He stayed at his home in Indiranagar to prepare for the civil services.

Though he was not able to crack the exam in the first attempt. He got more focused and practiced writing. Jeydev has strong family support. His parents would sometimes make a time table for him, and motivated him constantly. Jeydev hopes to serve in Karnataka.

Jeydev’s IAS strategy was that with his failure in the 2018 exam, he learned that it is important to focus on one stage at a time. Jeydev maximized his potential at each stage of the exam. For one exam he only studies the portion that was required for that stage.

Jeydev learned that one should not try to be excellent at a few areas or topics, but rather be average at all topics. He shared that it is good to have knowledge about the topics. However, the most important thing is how you convey that knowledge in the paper.

One of the major strategies he shared was that while writing the essays, it is important to convey what you want to say in an effective manner. It took him time to learn but he simplified what he was saying, and tried to make what he wanted to say more relatable.

One has to keep it in mind that the examiner is reading so many papers. It is important to stand out from the crowd and convey effectively. Practice essays until you get better at writing them. One should not complicate their essays but write in a way that is enjoyable for the reader.

He shared that one has to prepare each topic in detail. Even if an aspirant is disinterested in the topic and has more to contribute in different fields. They should prepare by looking at the exam as a whole.

He also shared that the attitude with which you prepare for the exams counts. It is important to be consistent in your preparation. What really helped him was practice and question papers. He often sought guidance from people that had experience with the exam. This gave him a better idea of where aspirants generally miss. – timesofindia

Question 1- What is Jeydev C.S strategy to become an IAS topper in the UPSC exam?

Answer –  Jeydev worked on the below strategy to top the UPSC Exam.

Question 2 –  What is IAS Jeydev C.S Rank in the UPSC exam.

Answer – Jeydev passed the UPSC exam 2019 with AIR 5 Rank in the exam.

Question 4 – What was the optional subject of Jeydev C.S.?